Marco Giampaolo will take charge of his first Serie A game as Milan coach this weekend as we travel to face Udinese on Sunday evening.

The Rossoneri added five new signings to the squad this summer, but question marks remain over whether or not any of them will feature in the starting XI on the opening weekend.

SEE MORE: Three out, one in: Four deals Milan could complete before transfer deadline

Theo Hernandez is recovering from an ankle injury, while the likes of Ismael Bennacer, Leo Duarte and Rafael Leao arrived late in the summer and perhaps haven’t had enough time to regain full fitness and fully adapt and integrate themselves in Giampaolo’s plans just yet.

As for Rade Krunic, he has played a steady role through pre-season having come back from an injury of his own, and so it seems unlikely that any of the quintet will be named in the XI this time round.

In turn, it’s expected that Giampaolo will go with a familiar line-up but with the key switch to his preferred 4-3-1-2 system, with La Gazzetta dello Sport noting that it could be something close to this:

However, there are certain positions up for grabs still it seems, as Sky Sport Italia’s Peppe Di Stefano has noted, as per MilanNews, that Franck Kessie could start instead of Fabio Borini in midfield, while Leao could yet get the nod ahead of Castillejo in the second striker role.

Borini has been impressive in pre-season in offering his usual tireless work ethic and intensity in midfield, albeit the quality has been lacking at times in the final third which has been his downfall since he joined us.

In turn, with Kessie being given an extended break after the Africa Cup of Nations, that could be an option for Giampaolo, while Castillejo has been equally as involved in pre-season and would be the smart choice at this stage given he has been working on implementing Giampaolo’s ideas and style of play since the first day of the summer.

Nevertheless, he has also disappointed when it comes to providing that bit of quality when it matters, and so with Leao impressing in a brief appearance against Feronikeli, the youngster could be a wise pick to offer more pace, movement and physicality behind Krzysztof Piatek.

Elsewhere, Lucas Paqueta could make a late case to displace Hakan Calhanoglu on the left of the midfield three, but other than that, it seems relatively safe to suggest that the line-up below could be what we see at the Dacia Arena on Sunday.

Time will tell whether or not there’s enough quality there to play the brand of football that Giampaolo wants to see and if it’s enough to secure a positive result. On one hand it’s disappointing that it seems unlikely we’ll see our new signings in action from the start, but time and patience is needed as we should be confident of picking up three points regardless. 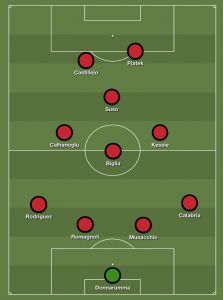