Milan face a trip to the Italian capital on Sunday evening as we take on Roma at the Stadio Olimpico hoping to build on last week’s draw with Lecce.

While the result was undoubtedly a huge disappointment, there were positive signs in Stefano Pioli’s first game in charge as the display was much improved.

The Rossoneri played with intensity, urgency and direction in their attacking play, and that was a refreshing sight given it’s been a long time since we could boast actually enjoying a Milan performance.

However, Pioli will know better than anyone that results are what matter ultimately, and given Roma will be up there battling with us for a spot in the top four, this is a crucial game.

Andrea Conti still looks off the pace and after giving away the penalty last weekend, his performance collapsed on itself as he was clearly affected by the setback.

Given he has spent so much time on the sidelines over the last two years, perhaps the solution is that he must play regularly and build up his fitness, confidence and form before we see the best of him. Unfortunately for Pioli, he hasn’t got the luxury of time and patience in getting results.

Davide Calabria has had serious issues with his discipline on the pitch so far this season given he has already been red carded twice. Provided he can actually show more maturity and composure, he arguably remains the ‘safer’ option of the two in that he’ll put a shift in both defensively and going forward.

As for Lucas Biglia, based on our performance against Lecce, it just looks as though Ismael Bennacer is an ideal fit for the style of football that Pioli is looking to implement.

With the rest of the team pressing with intensity and as we look to play the ball quicker and move up the pitch with a more direct approach, Bennacer could surely flourish in the heart of the midfield.

Granted he doesn’t offer the experience and level-headedness that Biglia provides, while he still needs to improve his defensive qualities to protect the backline. Nonetheless, he tops Biglia in several other categories and that is an essential switch moving forward.

Rafael Leao was dangerous early on against Lecce, but he squandered several opportunities that he should have buried and could have in turn made our night a lot easier.

There’s a lot to like about the youngster, but with his pace, movement and ability to get past players, he is arguably of better use out on the left flank.

Hakan Calhanoglu flourished in a free role last week, while his goal and assist came down the right flank. In turn, by switching the Turkish international to the opposite flank and giving Leao the freedom to attack down the left, it could give us a nice balance and a real drive to our play in the final third.

Further, that would allow Pioli to bring in Krzysztof Piatek into the No.9 role, and having finally ended his drought in open play last time out, he’ll be itching to get back out on the pitch and add to his tally.

Pioli has a reputation of getting the most out of the talisman at each club he’s been at, and Piatek can be that type of figure. Get him into dangerous positions with the right service and he will score goals, and it’s hoped that he’s restored to the starting XI this weekend to start firing us up the table.

MilanNews note that Sky Sport Italia are reporting that Pioli could go with the same Milan XI, while La Gazzetta dello Sport in their graphic below have gone with just one change as Calabria comes in for Conti. 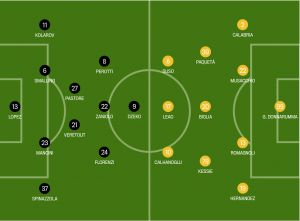 It’s hoped that change is made, but if there is at least one other from Pioli, it has to be Bennacer coming in for Biglia to give ourselves more energy, urgency and technical quality in midfield to not only win that particular battle from a physical standpoint, but also to unlock Roma with a better dynamic in that role with Bennacer’s passing ability.

Time will tell if Pioli sticks with Suso as MilanNews had reported earlier in the week, via Tuttosport, that he could be dropped, but Piatek coming off the bench wouldn’t be a disaster as long as Pioli doesn’t waste time making that change if the Spaniard disappoints again.