Milan face Atalanta on Sunday hoping to sign off on 2019 with three important points to extend our unbeaten run to five games.

After a crucial draw with Napoli, we were able to secure back-t0-back wins over Parma and Bologna, which in turn suggested that we could potentially be capable of building some momentum heading into the winter break.

However, there was disappointment last time out as we were held at home by Sassuolo, and with the gap to fourth place in Serie A still 11 points, we’ll no doubt be desperate to get back to winning ways this weekend.

It certainly won’t be easy against an Atalanta side also vying for another top-four finish this season while they’ve also advanced to the knockout stage of the Champions League, and a trip to Bergamo is never an easy assignment.

In turn, Milan will have to be at their best to come away with a positive result and it’s hoped that if Stefano Pioli stays consistent with his starting XI, that the familiarity and settled line-up benefits us.

One enforced change in defence

Lucas Paqueta will play no part this weekend as he’s ruled out due to suspension, as is Theo Hernandez which will be a huge blow for us given how influential he has been so far this season.

The 22-year-old has scored four goals and provided one assist in 13 games, and so it will be crucial that we either replace his threat down the left flank or find a better balance in the side to ensure we can deal with losing the pivotal dynamic that he offers going forward.

Ricardo Rodriguez is the obvious choice to step in and replace him, and as seen in La Gazzetta dello Sport’s probable XI below, the Swiss international is being tipped to return to the starting XI and he’ll hopefully put in an impressive shift having been pushed out by Hernandez thus far.

Pioli set to show consistency, no other changes

Aside from that change above, it’s a familiar looking line-up touted below, with Gianluigi Donnarumma, Andrea Conti, Mateo Musacchio and Alessio Romagnoli completing the rearguard.

Giacomo Bonaventura, Ismael Bennacer and Franck Kessie are being tipped to get the nod in midfield, while Suso, Hakan Calhanoglu and Krzysztof Piatek will likely once again form the attacking trident.

Much more will be needed from Kessie, Suso, Calhanoglu and Piatek in particular as they have disappointed for the most part this season, and so it’s hoped that this is the game where they can rediscover some form to sign off on 2019 on a positive note and give us renewed hope and belief that a top-four finish isn’t beyond us quite yet.

Atalanta have quality across the pitch and it’s their collective ability which is arguably their biggest strength. That said, the pace and directness of Luis Muriel and Alejandro Gomez in the final third is the obvious concern, and so our midfield and backline will need to give us a solid platform on which to go out and win the game. 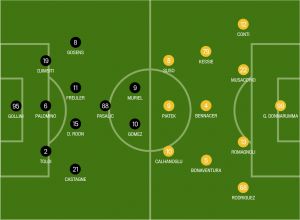