Milan face a trip to Brescia on Friday night as we look to keep our winning streak going and cut the deficit to fourth spot in the Serie A table.

After the switch to a 4-4-2 system, Stefano Pioli has overseen an upturn in form and the standard of our performances.

While we’ve kept things tight at the back, barring the goals conceded against Udinese last weekend, we’ve certainly improved in attack and are now finding the back of the net after our painful struggles earlier in the campaign.

However, the momentum must now be built on as this is only the start of our bid to potentially salvage something from this season, and another three points against Brescia would give all concerned a major lift.

As per MilanNews.it, two changes are expected to the XI that faced Udinese, with Mateo Musacchio coming back into the defence while it will be either Hakan Calhanoglu or Ante Rebic on the left flank instead of Giacomo Bonaventura.

Having found this winning formula after finally ditching the 4-3-3 system, Pioli will know that having a settled, confident group who are familiar with the tactical set-up and without endless tinkering with the personnel, it is bringing a sense of consistency and stability to the team.

With that in mind, perhaps the sensible decision is to avoid making any unnecessary changes, and that seems to be the case with the XI touted by MilanNews above, as well as La Gazzetta dello Sport’s probable XI in the graphic below.

Certain things are working for Milan right now, and while it’s not perfect and there is undoubtedly room for improvement both on an individual and collective level, it’s producing results and leading to improvements.

Calhanoglu or Rebic on the left?

While we all love Giacomo Bonaventura for what he’s done for the club over the years and he still has the intelligence, technical quality and threat to be an important figure in the squad, he struggled last weekend.

The 4-4-2 system has brought the best out of certain individuals such as Samu Castillejo and Ismael Bennacer, but it unfortunately doesn’t look as though it will suit Bonaventura, particularly if he’s deployed on the left flank.

Without the mobility and fitness to put in the defensive work required to also offer cover when Theo Hernandez goes forward, it looks as though the one certainty on Friday night is that the 30-year-old will be on the bench.

That presents the selection headache for Pioli though, as ultimately it could come down to a choice between either Hakan Calhanoglu or Ante Rebic.

Rebic is of course coming off the back of his match-winning display against Udinese, and with his confidence high, it would seem like the ideal time to give him a chance from the start to build on that.

That said, while Calhanoglu is far from one of the more popular figures in the current Milan squad, his work ethic and the defensive shift he’s capable of putting in could make him the safer bet for Pioli.

As a creative piece in our XI, we rightly expect much more from the Turkish international in the final third as he hasn’t contributed enough. However, especially in a 4-4-2, Pioli will be looking for other characteristics on the left side of the midfield and whether the majority of fans like it or not, Calhanoglu seemingly ticks a lot of the right boxes for the Milan coach. 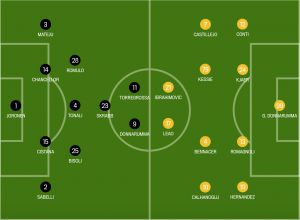