Amid ongoing speculation linking Ralf Rangnick with arriving at Milan ahead of next season, an underwhelming potential XI has been put forward with the addition of just two possible signings.

While much has been said and speculated over his touted appointment this summer, the fact remains that no deal exists as of yet between the two parties and so it remains to be seen if Rangnick even arrives.

READ MORE: Assessing the touted five-man core that Rangnick could build around at Milan if he arrives

Nevertheless, that hasn’t stopped several Italian outlets from continuing to provide updates claiming to offer insights into his plans for the Rossoneri moving forward, and now a possible XI has even been put forward.

As seen in the image below taken from the paper edition of GdS, and also reported by Calciomercato, there seemingly isn’t the widespread changes that many would perhaps expect.

It’s not exactly the most revolutionary of changes, as it’s a familiar system with the majority of the same personnel. If Milan are to rip up their plans this summer and start again to usher in a new era and expected change, it’s hoped that it’s much more extensive than this at all levels given it doesn’t look a whole lot different from what we’re working with now.

While Rangnick’s preferred style of play would represent a shift, it will surely take much more than the odd tweak to really stamp his mark on the side and to make it a more reassuring decision to shuffle the deck once again. 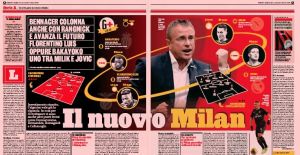