All eyes will be on San Siro on Sunday evening as Milan will look to get the better of rivals Roma in an important showdown between the two Italian giants.

It’s all to play for in the battle for Europa League qualification in the next 11 games, with Atalanta seemingly set to continue their impressive run and hold on to fourth spot in the Serie A table.

READ MORE: Why Milan have shown real faith in promising youngster aiming to be next breakout talent

Given the direct rivalry with Roma, it’s crucial the Rossoneri secure three points on Sunday and based on the probable formations touted below, there are clear battle lines and key clashes that emerge which will ultimately be influential in the outcome of the showdown. 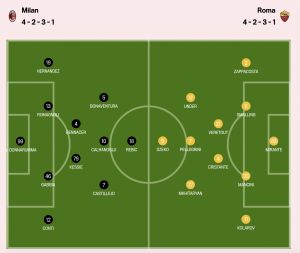 Ante Rebic was brilliant in the win over Lecce as his work ethic, energy and tenacity off the ball set the tone while his movement and ability to stretch the defence allowed the creative three behind him to influence the game too.

On top of that, he scored the all-important third goal to effectively kill the game off, and so the Croatian international will be delighted with how he adjusted to playing as the focal point up top after his initial opportunity ended in disappointment in Turin the previous week.

Chris Smalling is seemingly a certainty to start for Roma, while it remains to be seen who partners him as Gianluca Mancini could get the nod. That’s a difficult physical battle for Rebic to win, and so his runs off the ball and ability to create space for others is going to be incredibly important in our attempt to find breakthroughs.

Both teams like to get their full-backs forward to provide width, and so both Hernandez and Conti will hope to not only make their quality count in the final third, but they’ll be sent out to pin Zappacosta and Kolarov back too.

Taking that threat out of the equation will help to cut off the supply chain to Edin Dzeko who will feed off balls into the box, while Ismael Bennacer and Franck Kessie will have important roles to play too in tracking Roma’s attacking trio and ensuring that we aren’t outnumbered out wide and the overlap doesn’t cause us all sorts of problems.

If we can funnel Roma through the middle and thus swarm and stifle them in midfield with the likes of Samu Castillejo, Hakan Calhanoglu and Giacomo Bonaventura winning the scrap in that department, it could help us control proceedings.

To build on the above battle, there is a lot of energy and quality in the respective five-man midfields, and so if we can successfully implement the gameplan touted above, it will then be down to the individuals in question to produce the quality needed to win the game.

So often this season we’ve looked dangerous and enjoyed plenty of possession, but there has been a distinct lack of quality in the final third which has seen us struggle to break teams down and in turn have a poor goalscoring tally.

We put that right against Lecce, but we’ll need to step up another level if we want to see off Roma too.

Dzeko vs Gabbia (or Kjaer)

Edin Dzeko is going to be a handful, and as he showed the last time we played Roma, he can even have a quiet game but still make a decisive impact given his threat in the box.

Ideally, Simon Kjaer will be passed fit after picking up a knock earlier this week, as the experienced Dane has the physicality and height to match up well with Dzeko, who isn’t the quickest himself.

That duel will be fundamental, but if it’s Matteo Gabbia who has to step in, then the youngster has to show maturity and positional awareness in abundance while getting help from captain Alessio Romagnoli to ensure we don’t get caught out and Dzeko isn’t able to make a decisive impact on the game.

As per MilanNews, it’s now suggested that Kjaer could be fit enough to play after training on Friday in his bid to overcome his injury, but time will tell if it’s enough to convince Pioli to give him the nod.