Milan will look to continue their impressive form this weekend when we host Bologna with the battle for a top-six finish in Serie A continuing with just five games to go.

As things stand, the Rossoneri trail Roma by four points, and ultimately if we wish to skip over the preliminary rounds and head straight into the Europa League group stage, we must finish ahead of Paulo Fonseca’s men.

That theme is expected to continue on Saturday night, but importantly it looks as though we’ll be putting out close to our strongest possible XI as we look to avoid complacency and a possible slip-up, to continue to put the pressure on Roma who face Inter on Sunday night.

As seen in the graphic below, Pioli could make four changes for this encounter with Davide Calabria, Ismael Bennacer, Alexis Saelemaekers and Ante Rebic coming back into the starting XI.

Calabria looked fresh and did well when coming on against Parma, while Andrea Conti has struggled in the last two games which in turn perhaps makes a switch at right-back a sensible idea.

Given how important Bennacer is in the heart of our midfield in both phases of the game, it will be a relief to see him back in the side ahead of Lucas Biglia, with the Argentine stalwart doing his job to an extent in giving the Algerian a chance to rest, but the level of quality between the pair is very obvious.

Saelemaekers is also a boost with his energy and effort down the right flank as it suits our style of play well, especially as we need that pressure from our wingers with Zlatan Ibrahimovic unlikely to do much pressing. Meanwhile, Rebic’s goalscoring form in 2020 should arguably make him a starter for every game, but the 26-year-old will hopefully prove that point this weekend if he can play a pivotal role in getting us a positive result.

Those are four well-rested and hugely important players for us that could come back into the line-up, and it will hopefully be evident when we try to dominate the game, give Bologna no time to settle and pick up three more vital points.

As it was said before the Parma encounter, Milan have done all the hard work by taking 10 points from games against Roma, Lazio, Juventus and Napoli since the restart, but now comes arguably the trickier bit as we look to take maximum points from clashes which we’re expected to win against sides below us in the table.

Regardless of whether or not Roma slip up this weekend, all we can focus one is doing our job and that’s securing three points to keep our momentum going which in turn simultaneously piles the pressure on the Giallorossi who play on Sunday night and will no doubt be aware of our result. 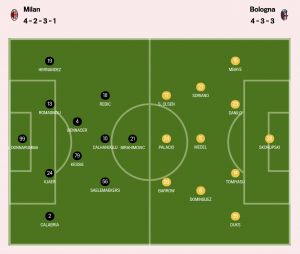 MilanNews have gone for a very similar line-up, although they have tipped Conti to keep his place at right-back and so Pioli may well make three changes to the side that won against Parma earlier this week.