While he’s already cemented his place in the heart of the side and has impressed all season long, Ismael Bennacer was still missing his first goal for Milan.

The 22-year-old made a slow start to the campaign as he initially struggled to break into the XI and looked a little vulnerable under Marco Giampaolo.

However, since the back-end of October he has established himself as a permanent starter for the Rossoneri and has developed into a pivotal figure for us in both phases of the game with his tenacity and work ethic off the ball coupled with his technical quality and passing ability on it.

Further, since the move to a 4-2-3-1 system where he has combined brilliantly with Franck Kessie, the pair are establishing a top-class partnership in front of the defence and still offering us a threat going forward too.

As seen in recent games, it has been Kessie who has led the charge between them with three goals in as many games, but this time round it was Bennacer who got his name on the scoresheet.

Off the mark and adding new string to bow

The Algerian international broke forward brilliantly in the second half, and as seen in the image below, not only was he found with an excellent pass from Hakan Calhanoglu, but the front three had pinned the Bologna backline deep in their own half and that in turn created the huge space for Bennacer to take advantage. 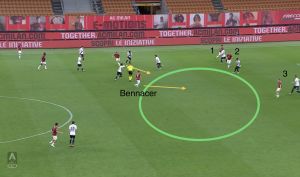 It was an important team effort to create the opportunity, and as we’ve seen with Kessie in recent outings, the midfield duo are going to have more chances to add to their respective tallies in the coming weeks.

Ultimately, their main job is to provide defensive protection and make that quick transition from defence to attack with crisp and swift vertical passes to the more creative players in the side. It has worked superbly since the restart, and it’s hoped that they can continue to have that influence particularly with tough games against Sassuolo and Atalanta coming up next.

Nevertheless, one area in which they can both still improve and based on the evidence of the last three or four games, they are both capable of getting more goals given the way we’ve played since the restart and how our attacking play and build-up play has developed.

With 25 goals in our last eight league games, we’ve almost surpassed our goal tally from the previous 26 Serie A outings which stands at 28. It would come as no surprise if Bennacer and Kessie start to chip in with more goals but for now, it was an absolute delight to see the former get his first for the club as it was the icing on the cake after what has been a brilliant few months for him in establishing himself as a pillar of the side moving forward.